Our great grandparents were healthier than us, and here's what they ate 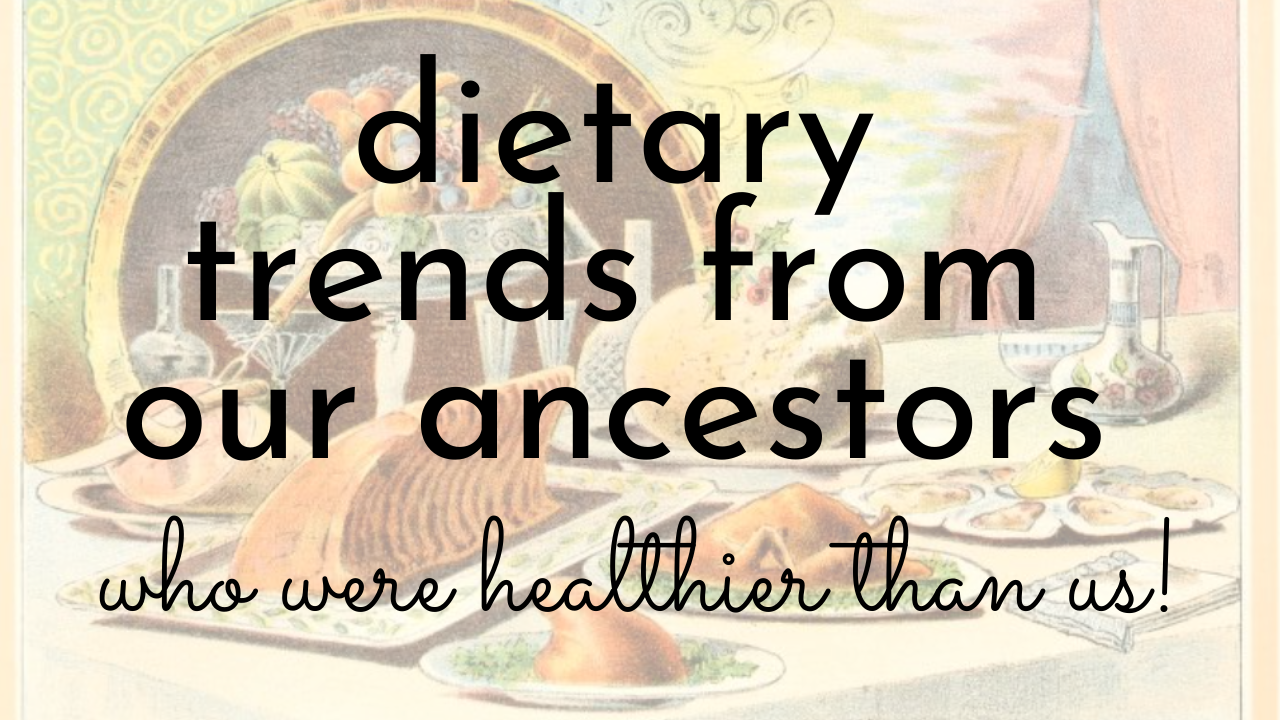 The health in America is declining, rapidly. So, in this article we will review potential reasons why, and analyze what our great grandparents ate (and what they didn’t eat), during a time when chronic diseases were not nearly as prevalent.

With such a large reliance on processed food and massive marketing dollars spent by large food companies, we’ve lost touch with food culture.

In fact, we don’t have food culture.

People are truly confused as to how we should eat, and how to form meals.

And with chronic diseases, obesity, and autoimmunity on the rise, one thing is clear: what we are doing now isn’t working. 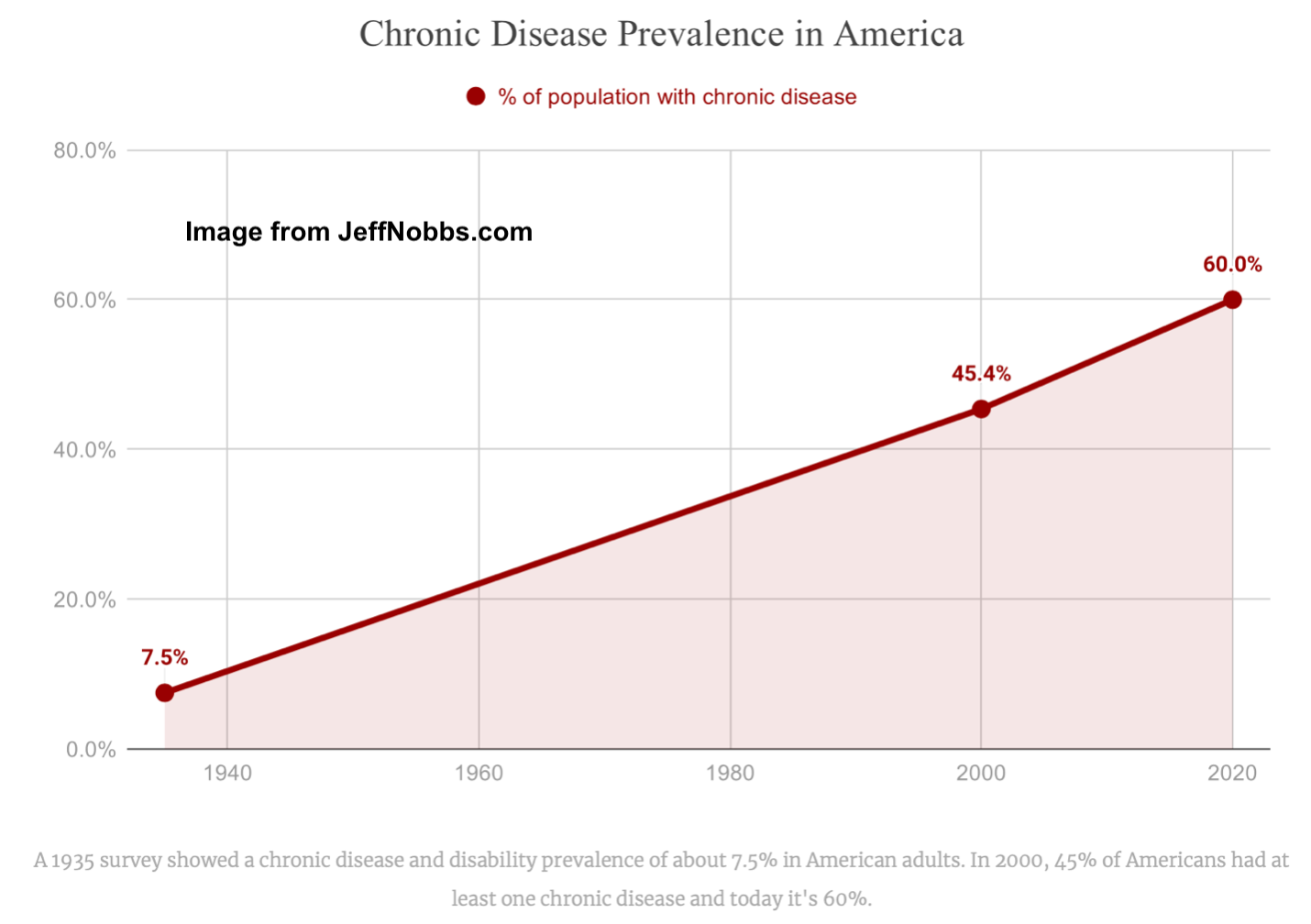 A new 2022 study found that less than 10% of Americans have good metabolic health (ref). 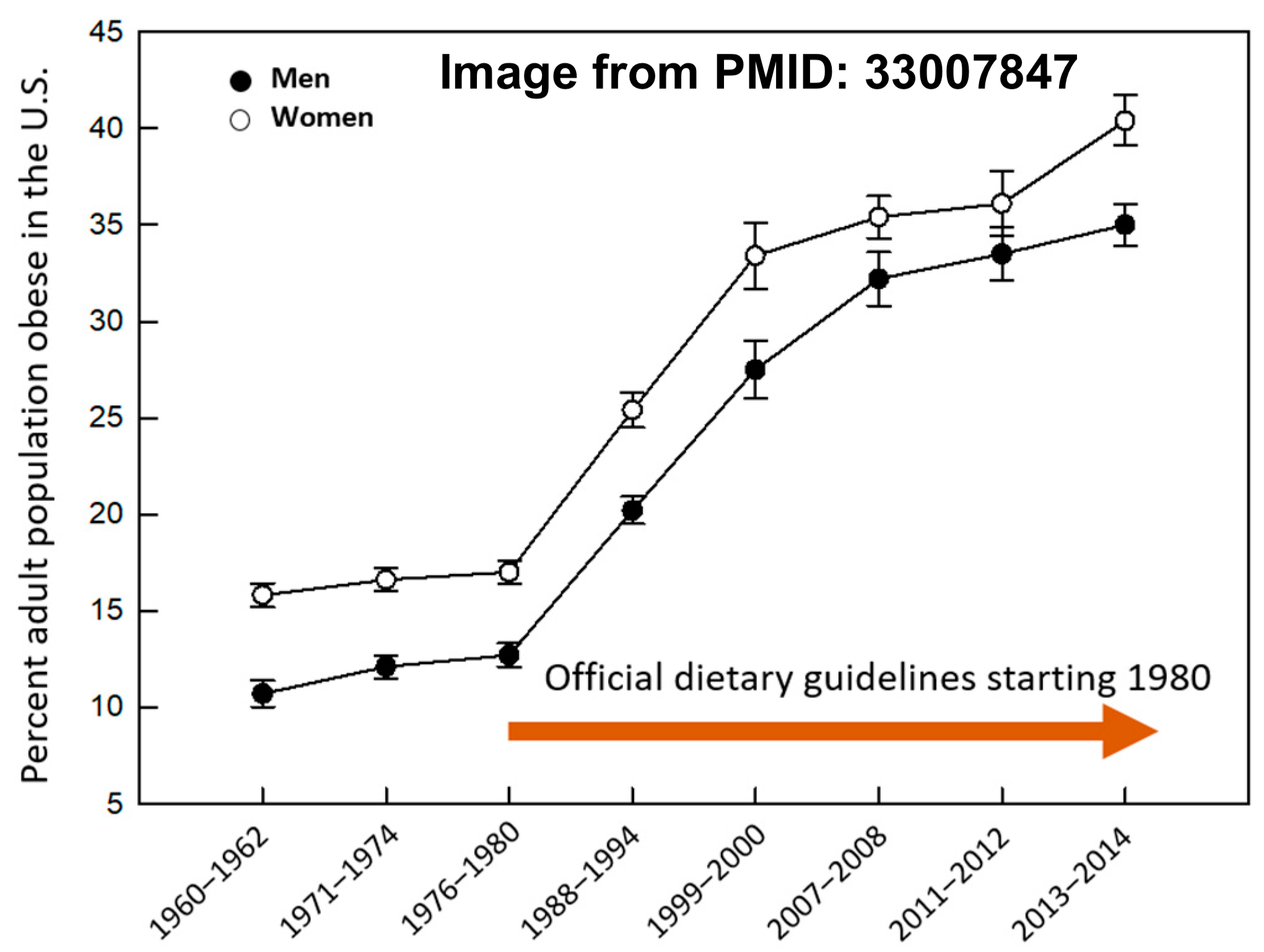 And while science and technology are improving, America is the only developed nation with a *declining* healthy life expectancy and total life expectancy! (ref) And this data is before C0V1D.

You can analyze the following data from the World Health Organization by comparing the TLE or HLE from previous years. This data is for the United States of America.

With a declining TLE and HLE and obesity on the rise, it’s time to admit we are doing something wrong.

But we didn’t always have such widespread chronic health problems…

Well, we are certainly less active, that's for sure.

But what and how we eat plays a big role in our health.

So, let’s go back in time a bit to see what people were eating in a time when chronic diseases were not as widespread to gain some insight to the type of food that can support health.

How can we do this?

Over the last few months, I have been moderately obsessed with reading old fashioned cookbooks from the 1700-1900 era. These cookbooks provide a great picture as to how families ate at the time. And how much food culture they had, that was passed down from generation to generation.

The nutritional wisdom continues to fascinate me as I learn more about cultural food preparation.

So, let’s dive into 10 trends I have gathered comparing these cookbooks to how most people eat today. (and what 'mainstream' claims as 'healthy')

Trend #1: they ate the whole animal

Meaning, nose to tail eating was just a normal part of every day life.

No, nothing went to waste so they ate pretty much every cut on the animal.

The result was not only just lest waste, but also a wider nutrient intake, and more balanced amino acids.

The organs are often the most nutrient-dense (superfoods), and bone in cuts of meat often contain a lot more collagen relative to pure muscle meat. 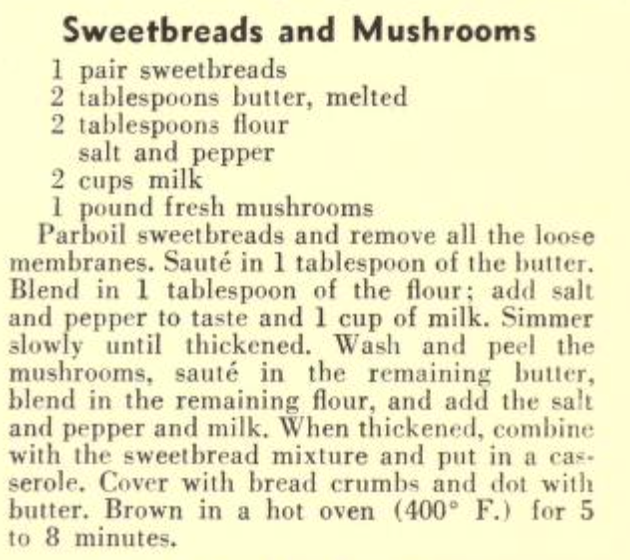 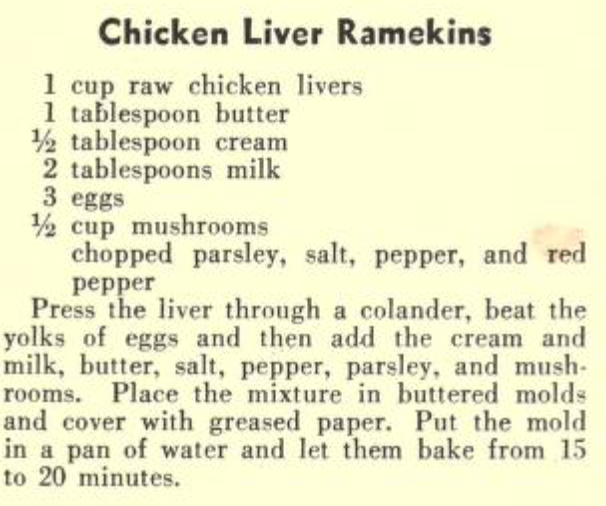 Most days of the week, a bone in cut was being braised, providing an abundance of bone broth and gelatin, on top of the amino acids in muscle meat.

Trend #2: they ate a lot of meat, and consumed it daily

Check out a few pages from the Table of Contents from "The Lady's assistant for regulating and supplying the table" from 1787. 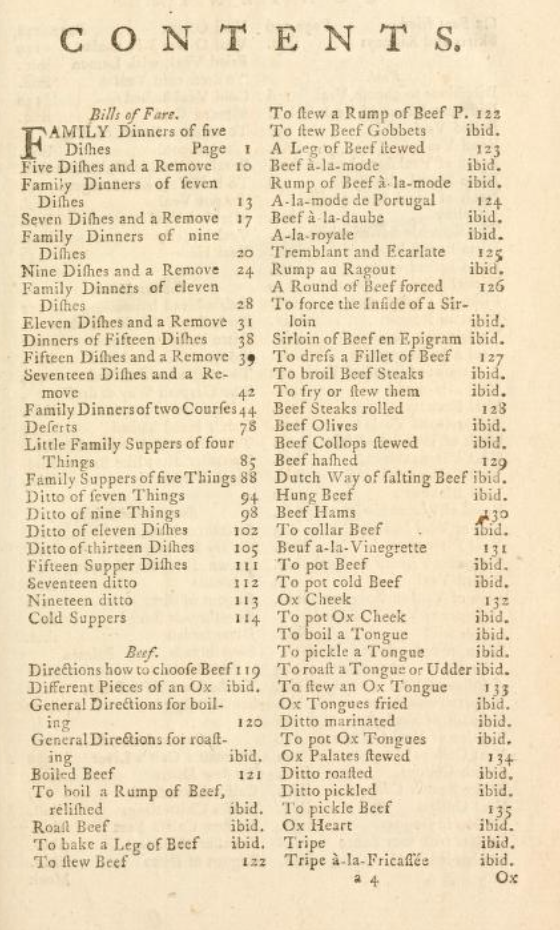 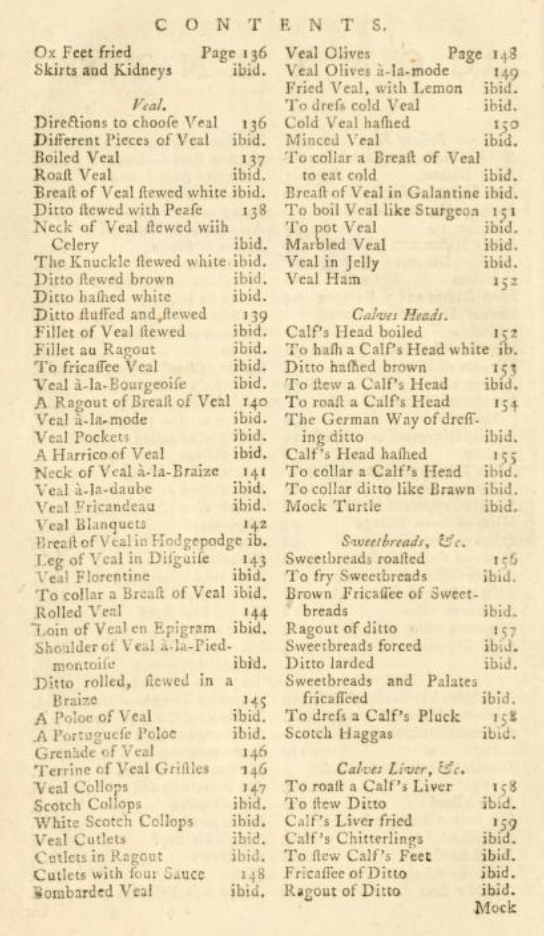 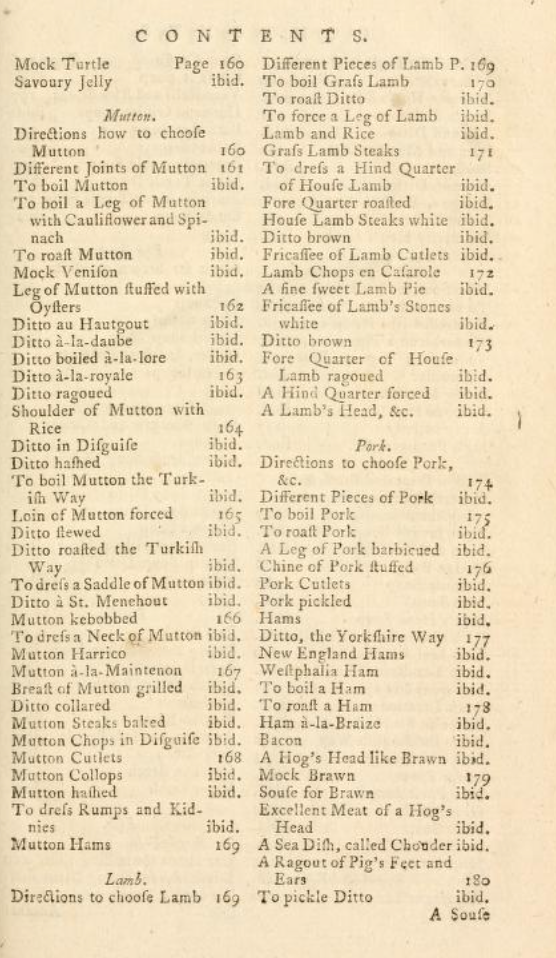 So much meat, and so many diverse, nose to tail cuts!

The consumption of meat was considered a mark of a good diet, and its complete absence was rare (consuming low amounts was in the case of an extreme poverty diet). (ref)

They did not fear saturated fat, and recent re-evaluations of the data used by Kellogg to demonize saturated fat in the 1900s are showing a different picture. Some researchers have instead demonstrated that "[s]aturated fats from animal sources [are] inversely correlated with the prevalence of NCDs [non communicable diseases]." (ref)

Images below are from the paper, 'Re-evaluation of the traditional diet-heart hypothesis: analysis of recovered data from Minnesota Coronary Experiment (1967-73)', published 2016 (ref). 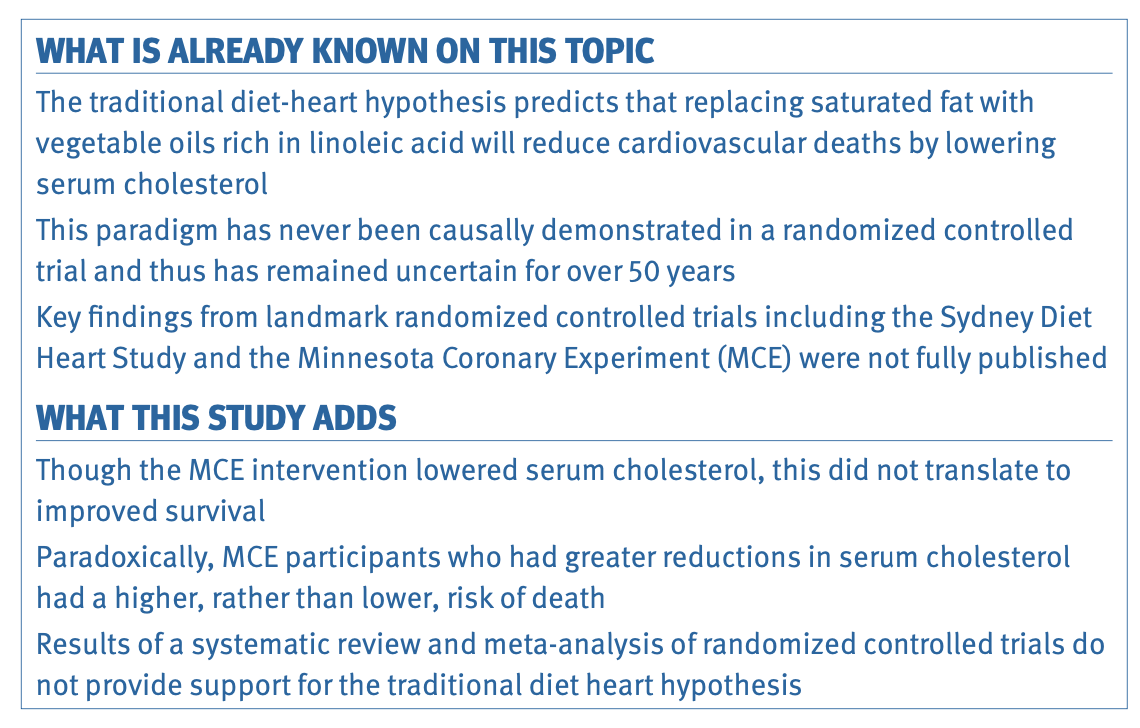 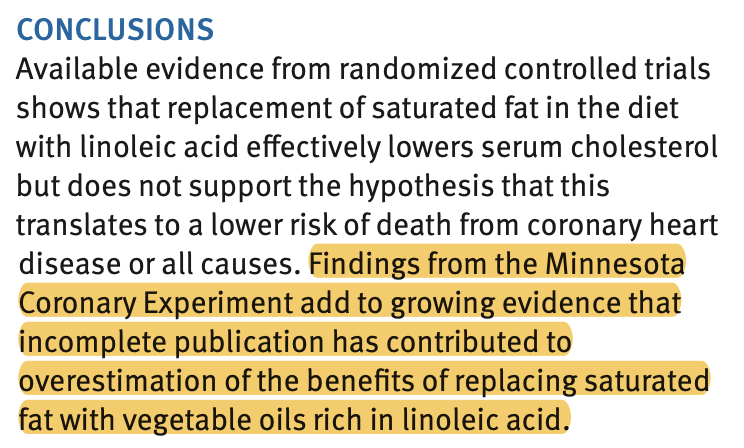 We are eating a lot more vegetable oils, and less animal fats relative to the early 1900s, and yet our health is declining. Was it really the meat that caused health issues? No.

Isn't the answer as to 'the best type of fats' obvious? 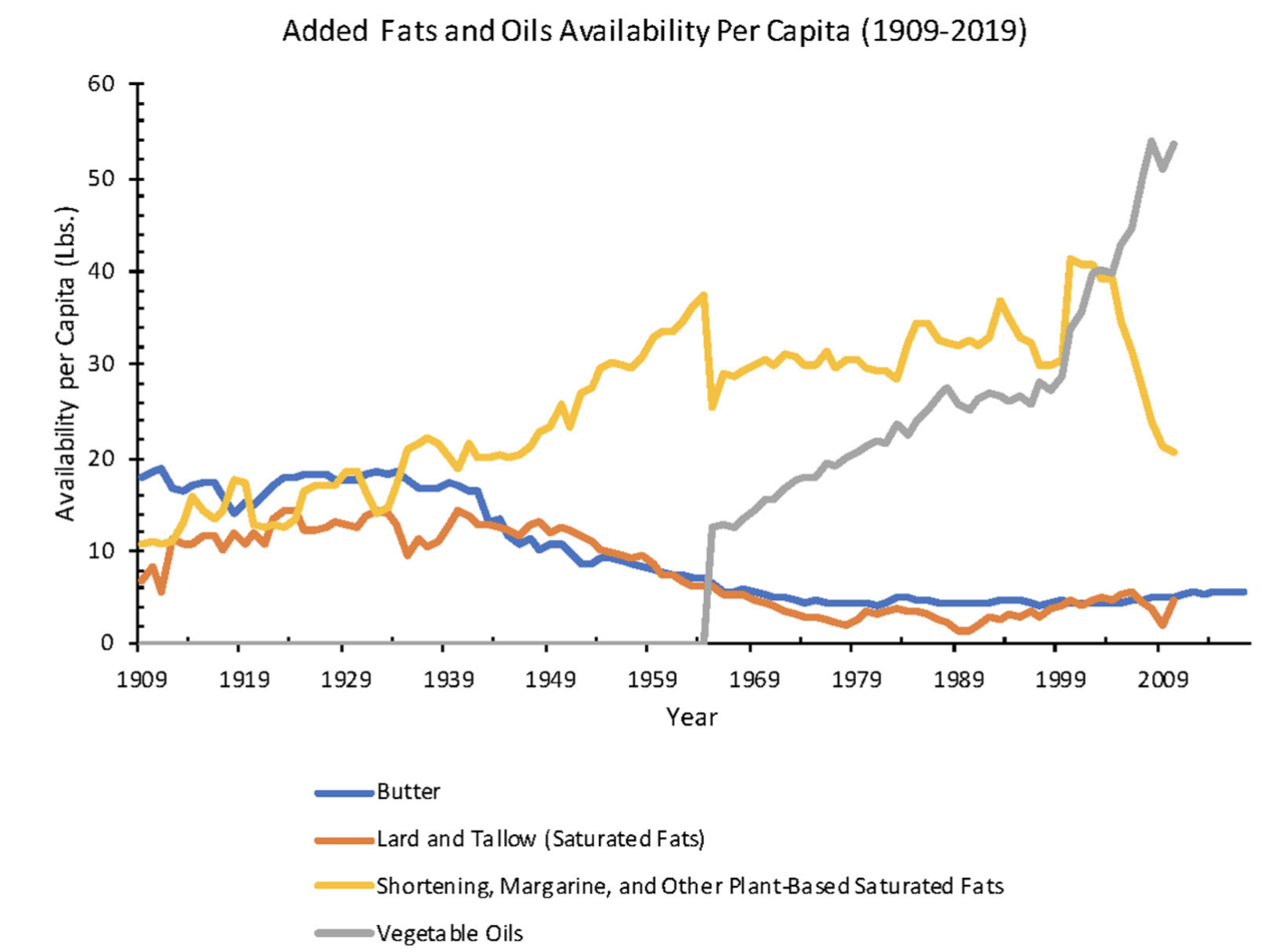 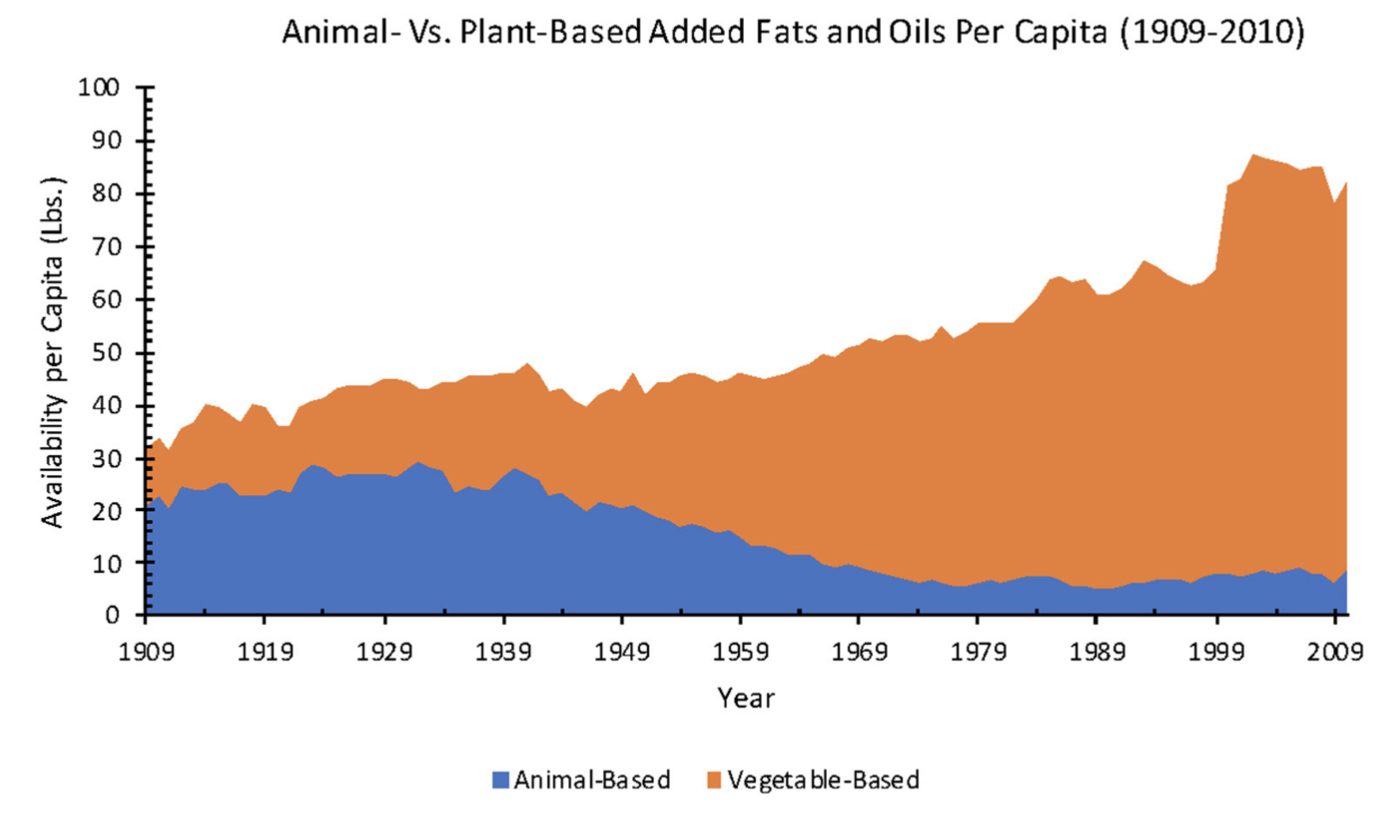 Trend #3: they ate a wide variety of animal products

Meaning, they didn't just eat chicken (which Americans seem to prioritize these days). Each animal provides a unique set of nutrients, and some are higher in certain nutrients than others. For example, beef and lamb are high in zinc. While pork is high in Vitamin B1.

Again, this diversified protein intake resulted in a diverse intake of beneficial nutrients.

Carbohydrates were consumed all year round, and a lot of them! They definitely ate in season, but they went through extensive preparation (think jams & jellies) to ensure access to carbs 365.

Just a few examples of grape preservation from “The lady's assistant for regulating and supplying the table”, 1787. 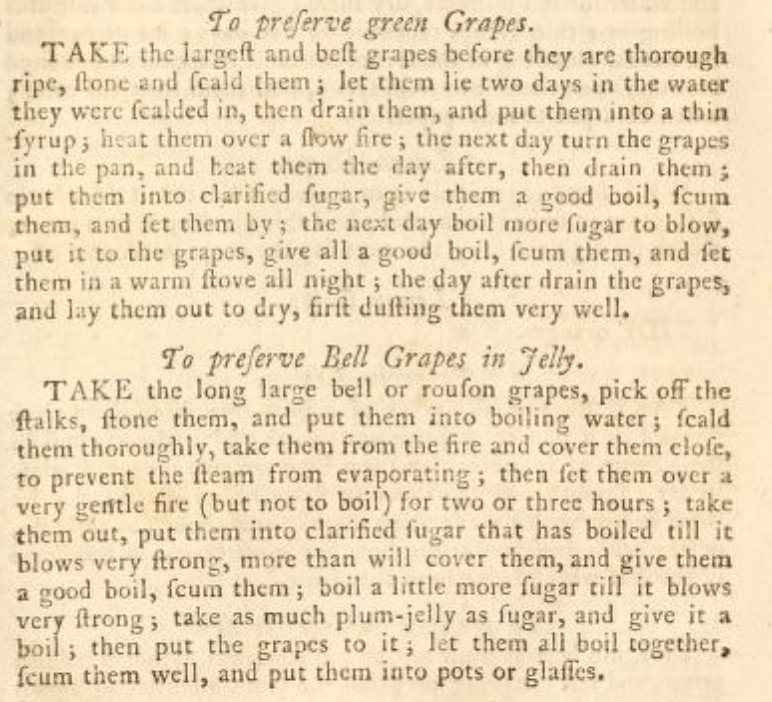 Here are examples of a 'Bill of Fare' (meal plan) with some receipts (recipes) for the month of January (winter) and August (summer). 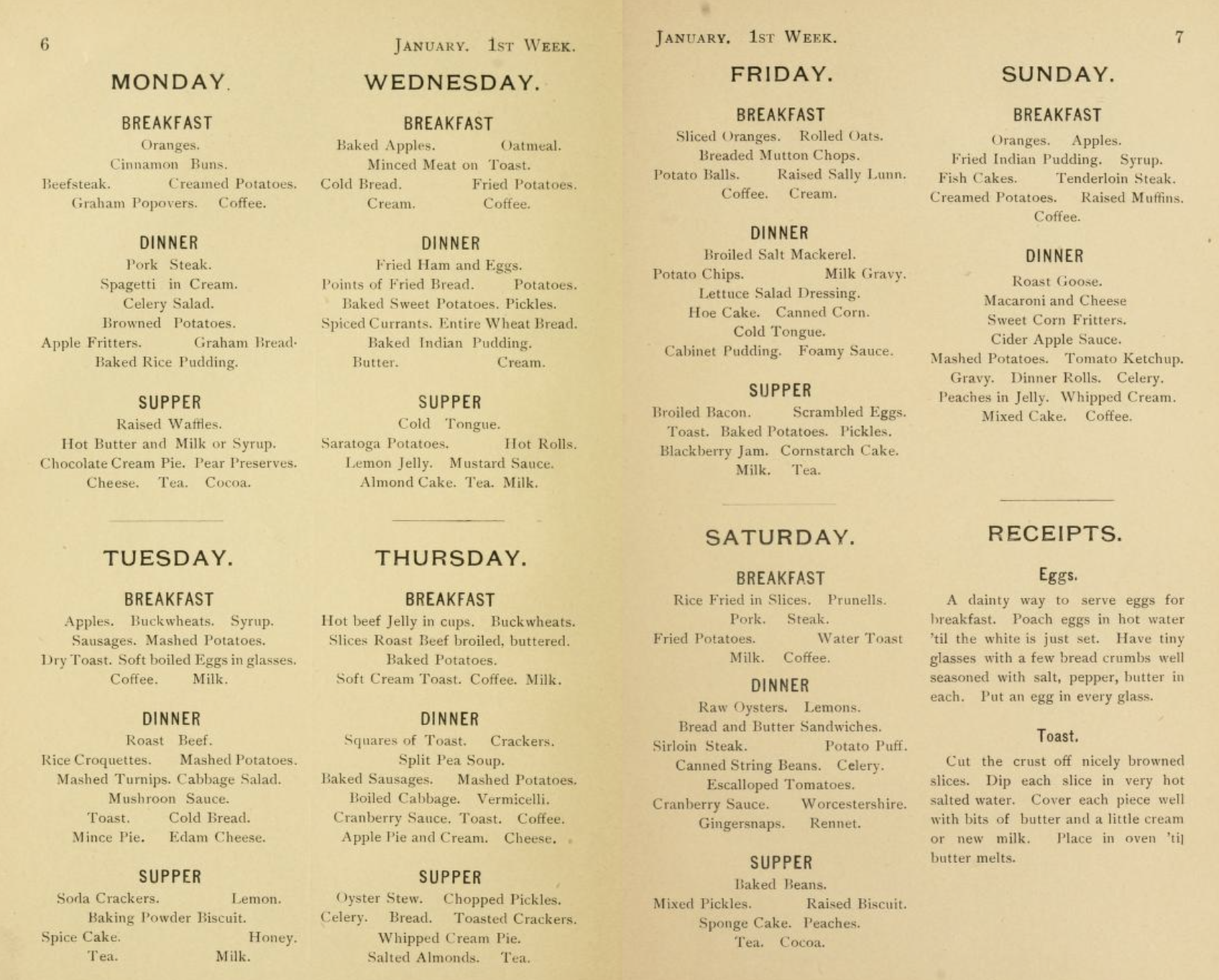 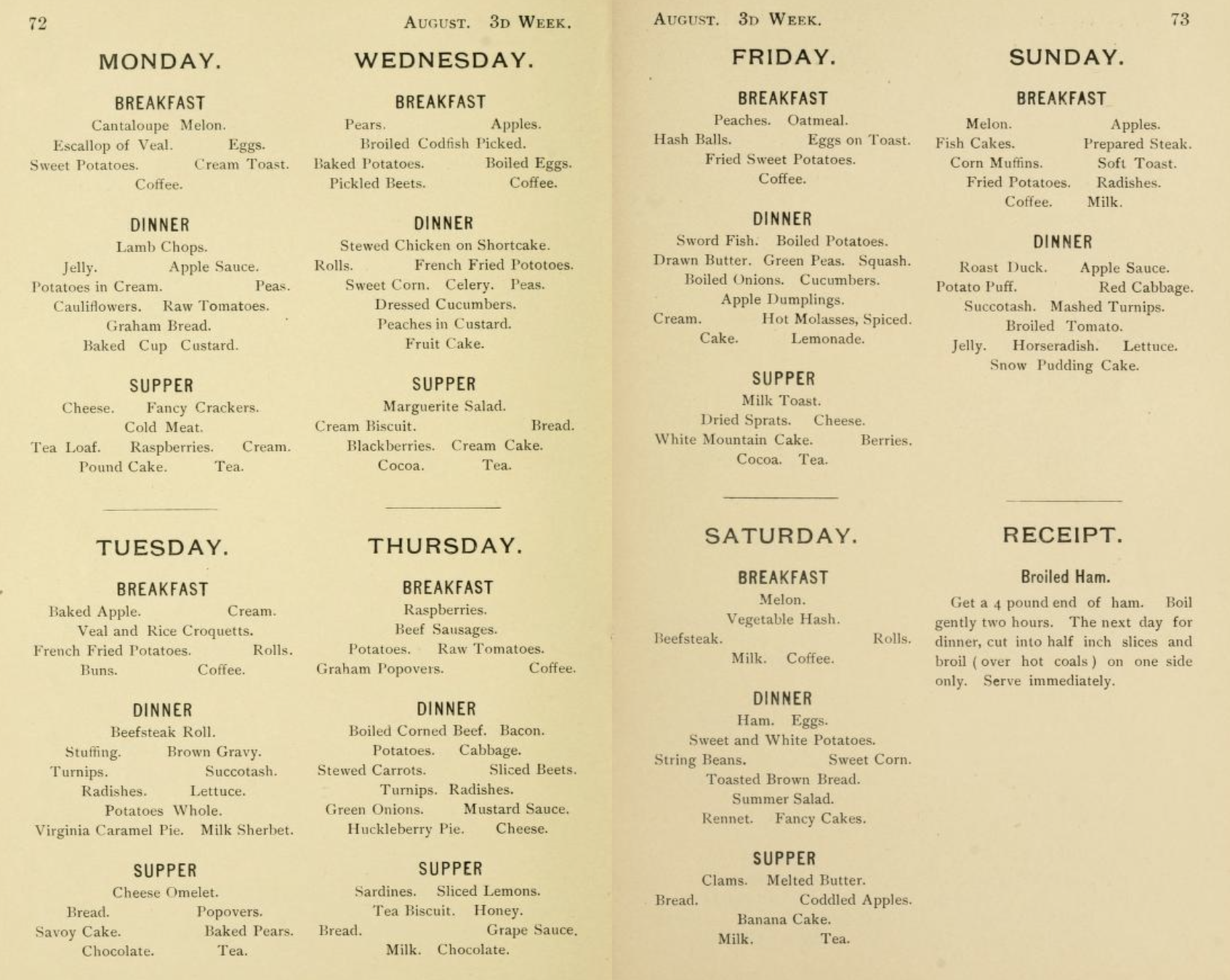 Carbs consumed were largely fruits in season (citrus, for ex in Jan. melons, for ex in summer), jams & jellies, honey, sugar (in desserts), potatoes, flour in baked goods, and bread.

Trend #6: they ate a wide variety of vegetables, but mainly cooked

I do not think raw kale smoothies were on the menu! We are not ruminant animals who have complex digestive systems to break down thick cellulose fibers in raw veggies. We need easy to digest food!

Trend #7: daily sugar consumption in the form of homemade desserts

Yes, sugar is low in nutrients. But no, sugar is not inherently toxic. In the context of an otherwise nutrient-rich diet, sugar can be metabolically supportive.

Their desserts were largely made from unfortified flour, sugar, butter, eggs, and milk. (No sugar alternatives, margarine, faux-eggs, or nut milks). 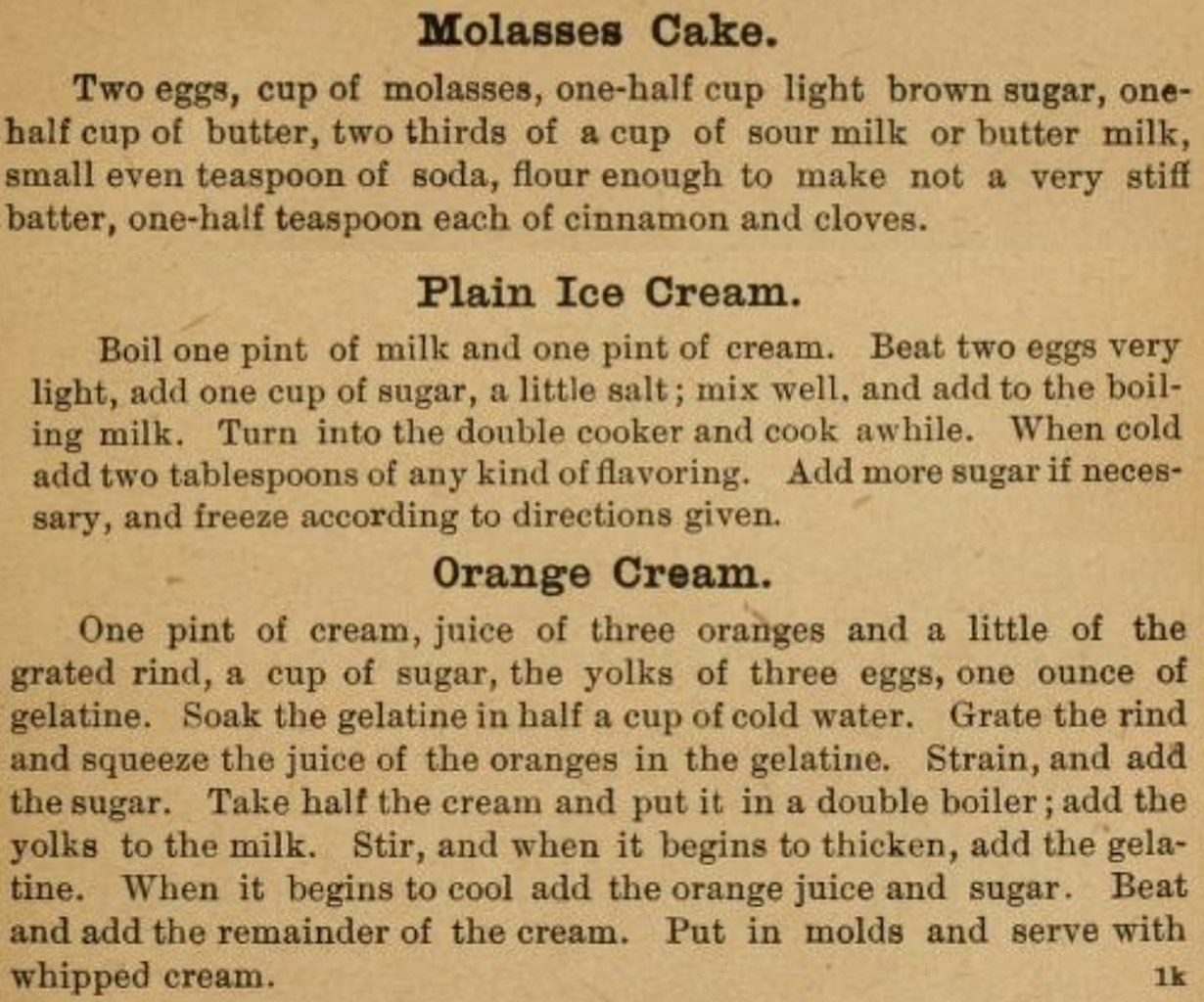 Above image from ref.

Relative to the early 1900s, we currently consume similar amounts of cane and beet sugar. Again, sugar is often demonized, but is it the sugar ingredient, or the food the sugar is commonly packaged in? (like Twinkies, doughnuts, cakes, etc. that contain fortified flour, preservatives, dyes, and vegetable oils)

Consuming sugar in homemade baked goods (without vegetable oils) in the context of a well-rounded, nutrient-rich diet is not toxic. 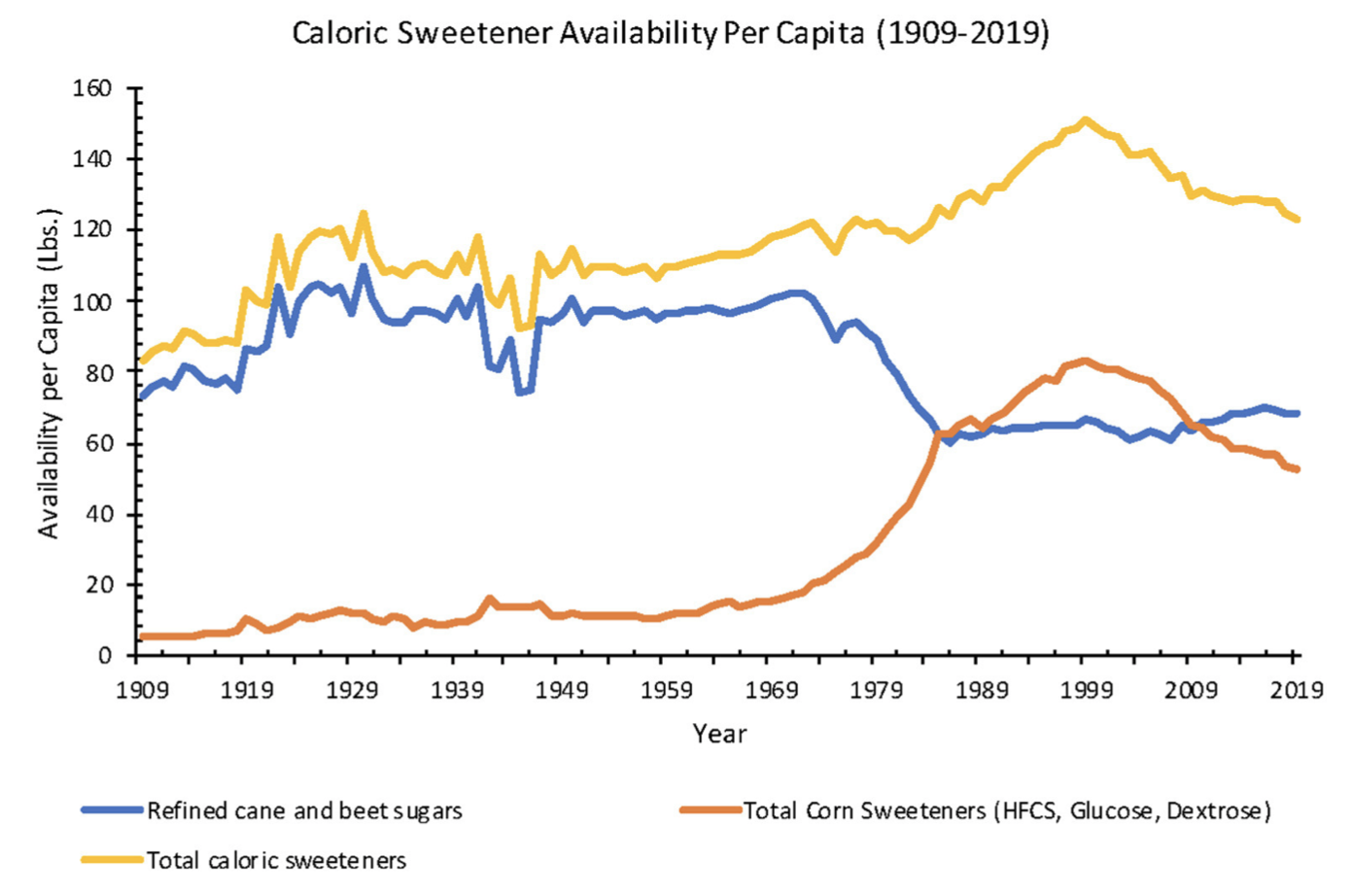 Trend #8: they did eat refined flour

This is actually something I have changed my mind about. Before reading cookbooks, I really didn't think flour was used often.

But refined flour was a part of their diet through daily treats, and was regularly used in sauce recipes.

HOWEVER, their flour was not fortified with iron (metal shavings, which was added to our flour and implemented in the 1940s), was not genetically modified, and was not coated in high amounts of pesticides (like Glyphosate).

Trend #9: they did not eat processed food out of a bag

Home-cooking was the norm. In fact, processed food consumption has increased from <5% in the 1800s to now more than 60% today. (ref) Cooking and prepping food was a sacred activity, not an inconvenience.

Many cookbooks viewed it as a cherished art form, passed from one generation to the next. 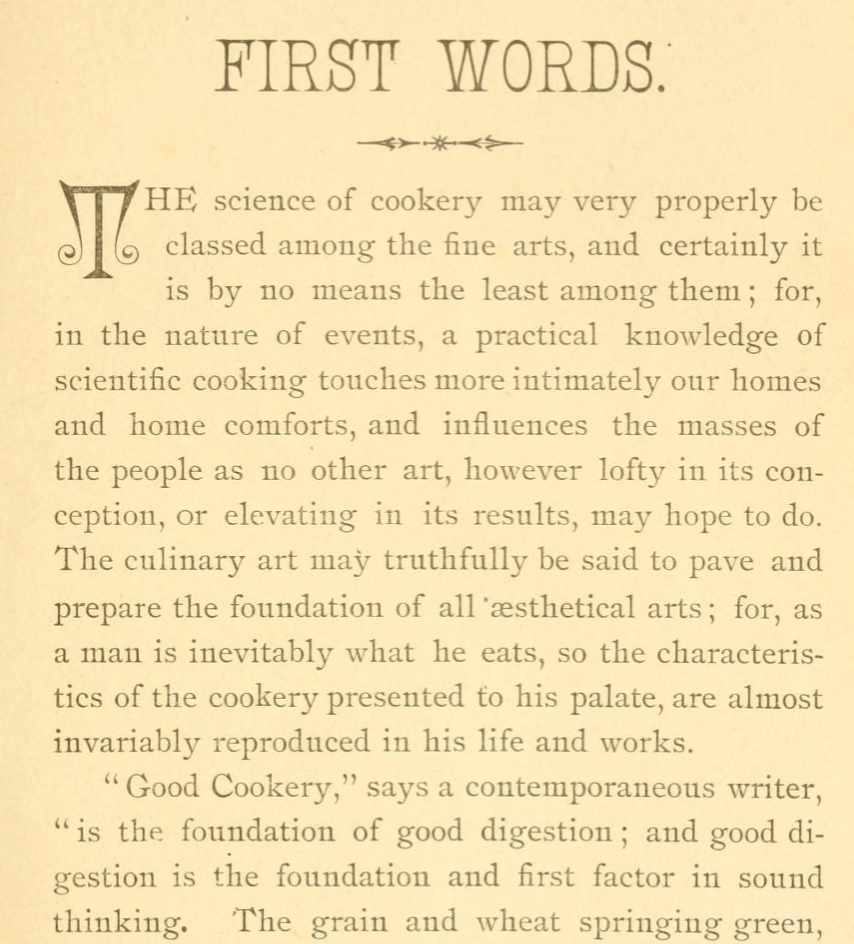 Trend #10: they did not voluntarily fast, and had 3 meals a day plus snacks

Check out some screen shots from various vintage cookbooks. 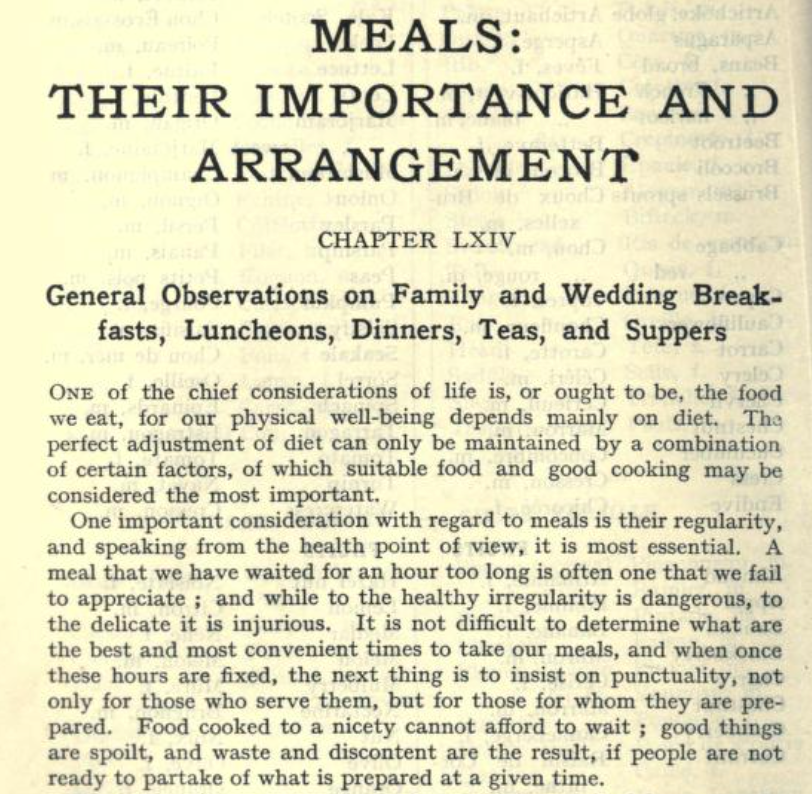 Many cookbooks contained Meal Plans, which were termed "Bill of Fares".

Here are a few examples -- 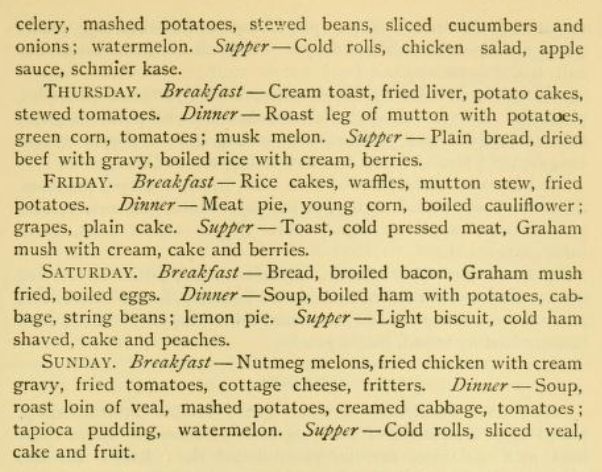 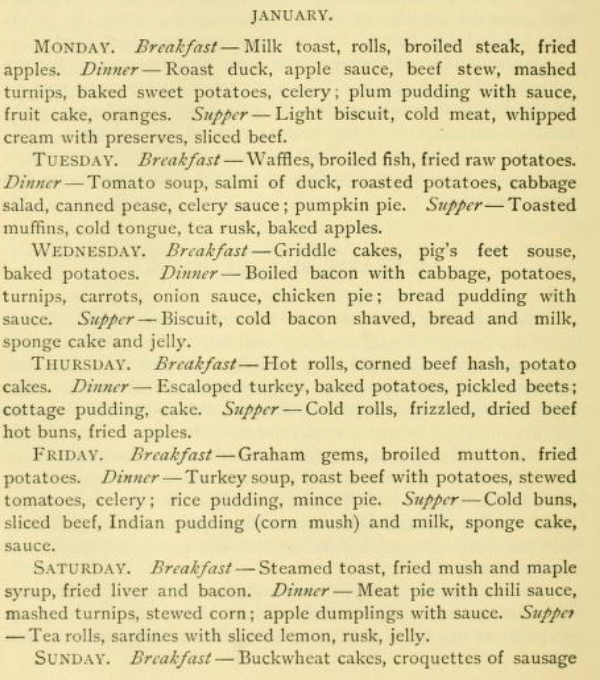